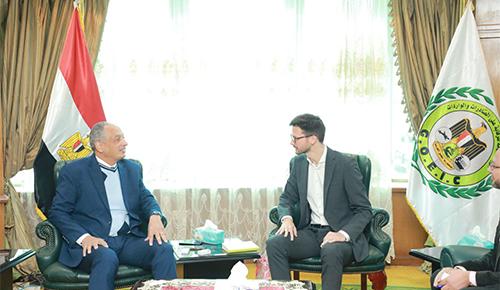 They discussed the facilities provided from GOEIC to the business community of the exporters in Austria.

Engineer/ Essam Elnagar, the chairman of GOEIC responded to the inquiries of the delegation about how to register Austrian companies in white list at GOEIC, and how to use this system to accelerate the pace of customs release of imported Austrian shipments to Egyptian Arabic Republic.

During the meeting, Goeics' functions and its supervisory role have been displayed in the light of the developments related to the application of the single window system on the imported shipments.  Also, the delegation wondered about how to inquire about the companies that have been warned or suspended according to the ministerial decree numbered 43/2016 .He answered that there is a list with companies' names that don't meet the ministerial decree requirements published on the website of GOEIC periodically with the  three languages (Arabic-English-French).

At the end of the meeting, he expressed his pleasure as per the delegation's visit and expressed that GOEIC is always ready to provide its full support to the business community.