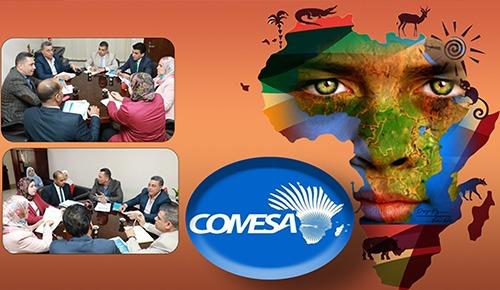 In light of the great care given by the ministry of trade and industry to develop and modernize the Egyptian exports and to achieve the goals of the ministry's plan to get the volume of exports to reach 100 billion dollars annually.

And in the framework of follow –up of DR. / Neven Gamea (minister of trade and industry) as per the developments occurring at  GOEIC being the safety valve to save the Egyptian product reputation abroad and since GOEIC has a large number of competencies and young cadres who can be exploited to upgrade the services system and fasten the  execution procedures to cope with  the requirements of the digital transformation adopted by our country.

In light of the directions of engineer/Esam Elnagar (chairman of General Organization for Export and Import Control) on aligning and facilitating  the  procedures for the Egyptian importer.

The meeting was attended by the following:

- DR. / Dina Mahmoud (Head of the central administrative of agreements in the ministry)

- Mr. / Mohamed Samir (General Manager of agreements in the ministry)

The meeting was held to analyze some problems which face the exporters to facilitate their commitment towards applying the rules of origin of (COMESA) agreement and agreeing to publish the standards of origin to all exporters and how the exporter fulfill these rules on issuing the origin certificates from GOEIC, so the problems that face the exporters concerning the incoming verifications from the importing country will be decreased.

NOTE: COMESA is an abbreviation of "common market for eastern and southern Africa" which means "the common market for the East and South Africa". It is a preferential trade zone stretching/extending from Libya to Zimbabwe and includes 19 member countries that are concerned with developing the important sectors of their economy and trade exchange with the black continent countries.

The buildup of COMESA group returned to 1994 instead of the "preferential trade zone" which already existed since 1981; initially it was established by 9 countries; namely, (Egypt-Djibouti-Kenya-Madagascar-Malawi-Mauritius-Sudan-Zambia-Zimbabwe). Afterwards, Rwanda and Burundi joined the agreement precisely in 2004 and then (LIBYA AND COMOROS) joined in 2006.

Egypt is linked to the African continent with close historical ties, so Egypt is keen to support the cooperation relations with the countries and the African blocks due to the great importance that the continent occupies, guaranteeing the commercial expansion and increasing the investment, export and import opportunities.

Egypt headed to the African continent especially to the countries which are members in common market for Eastern and Southern Africa (COMESA) where it has a remarkable geographic location and Situated beside other great important regions such as the Middle East, the Arab World and Horn of African region.

Egypt joined to "the preferential trade zone agreement for eastern and southern Africa" in May 1998, which signed in 21 December 1981 and entered into force in 30 September 1982, as a result of the successful which achieved by this agreement, the member counties decided to develop the cooperation between them by establishing the common market for eastern and southern Africa "COMESA" as a new step to achieve the African economic community, it signed in 8 December 1994. As "the common market to the east and south Africa" will replace "The preferential trade zone agreement".

Egypt joining to the agreement springed from its compete comprehension of the strategy of the geographic circumference and Egypt's relations with the neighboring countries especially the African Basin countries. Egypt's membership in the COMESA provided her opportunity to open markets and getting new relative merits.

The most important Egyptian exports to COMESA countries: