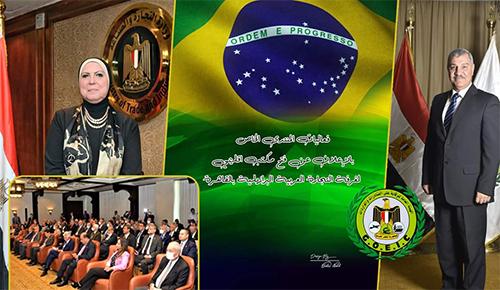 Neveen Gamea:"A territorial bureau for the Brazilian Arab chamber of trade in Cairo has been inaugurated to serve the common interests of businessmen and reinforce the commercial cooperation and strengthen the movement of commodities and services between the two countries."

Both The ministry of trade and industry and the Brazilian Arab chamber of trade signed a memorandum of understating to establish a representation office for the chamber in Cairo to promote the commercial and economic cooperation between Egypt and Brazil as well as the surrounding countries.

Dr. Neeven Gamea the minister of trade and industry and Mr. Osmar Shahfa the head of the Brazilian Arab chamber of trade signed the agreement.

The signing ceremony was witnessed by:

- Dr. Khaled Hanfy: Secretary General of the Federation of Chambers of Commerce

- Engineer Ibrahim ElAraby: the head of the General Federation of Chambers of Commerce.

The minister declared that this 5 years agreement is an outcome of the ministry's caution to create a proper framework for cooperation among business men in the two countries and this agreement springs from the importance of cooperation between the private sectors in both Egypt and Brazil. Also, she indicated that the Egyptian government and the private sector, headed by the General Federation of Chambers of Commerce, welcomed the opening of a regional office for the Arab-Brazilian Chamber of Commerce in Cairo, which would contribute to serving the common interests of Egyptian and Brazilian businessmen, supporting trade cooperation and facilitating the movement of goods and services between the two countries, especially in light of the free trade agreement signed between Egypt and the countries of the Mercosur group, which includes Brazil, Argentina, Uruguay and Paraguay ,that entered into effective implementation from 2017.

Content Rating
Share
The ministry of trade and industry M.G. Ismail Gaber: the chairman of GOEIC the Brazilian Arab chamber of trade