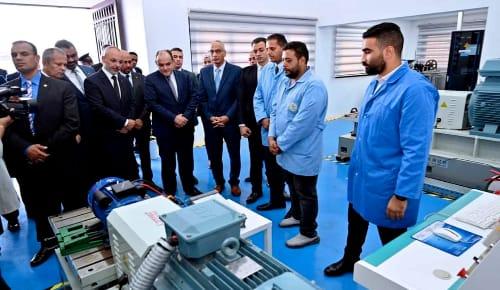 Eng. Ahmed Samir - The Minister of Commerce and Industry: Upgrading the laboratory and procedural capabilities of the Ministry's affiliates is a key pillar for improving the system of services provided to the business community.

GOEIC play the main role in the application of standard specification and quality standards to all imported products to maintain the health and safety of the Egyptian consumer.

Essam Al-Naggar: GOEIC possesses human cadres and competencies capable of providing outstanding services and keeping up with the requirements of digital transformation.

Eng. Ahmed Samir, Minister of Commerce and Industry, stressed that upgrading the technical and practical capabilities and components of subsidiary bodies and agencies comes at the top of the priorities of the Ministry's action plan during the current phase. Noting the Ministry's desire to expand the establishment of specialized and accredited inspection laboratories in order to implement the latest international regulations and rules in the inspection procedures and release of exported and imported shipments in order to facilitate the movement of trade between Egypt and the countries of the world.

The Ministry is working to develop the procedural system in the branches of GOEIC and accelerate the pace of inspection and release of shipments in coordination with the relevant agencies. This contributes to improving the system of services provided to the exporters and importers community, stressing the need to adhere to the application of specifications standards and quality standards on all imported products, to maintain the health and safety of the Egyptian consumer.

This came during the opening of the Minister, accompanied by Eng. Essam Al-Naggar, Chairman of GOEIC, for the electrical engine inspection laboratory and development work at the headquarters of GOEIC in Cairo International Airport, as part of the Minister's visit to GOEIC, which he inspected the departments and laboratories of GOEIC.

The Minister said that the opening of the new laboratory comes within the framework of the Egyptian State's quest to increase the competitiveness of the industrial sector in order to keep pace with the global industrial development and the trend towards the use of advanced solutions and techniques, especially in the energy-saving electric motor sector, as well as to upgrade Egyptian standards and work towards their conformity with international standards, thereby contributing to reducing energy consumption and improving industrial productivity.

During his opening of the development work at the Administrative Building of the General Organization for Export and Import Control, the Minister indicated that the development work came within the framework of strengthening the GOEIC's role as an essential focus of the strategy of the Ministry of Trade and Industry aimed at promoting and developing foreign trade and achieving the objectives of its plan to reach the value of exports to 100 billion dollars.

Eng. Essam Al-Naggar, Chairman of the General Organization for Export and Import Control, explained that the establishment of the new engine plant, which was implemented in cooperation with ABB Electrical Industries, is part of the program of production using smart technology and energy efficiency, which was launched in 2015 and implemented by the Ministry of Commerce and Industry in cooperation with the International Finance Corporation (IFC) aims to increase the competitiveness of the industrial sector by increasing the efficiency of energy uses in the industry , The program achieved positive results, including setting a standard for power levels of electric motors and developing a roadmap for local manufacturing of energy-saving electric motor components.

He pointed out that the development of the headquarters ensures the upgrading of the building and providing it with the latest capabilities and hardware in order to provide a suitable working environment for workers and enhance their productive capabilities and the level of performance and production, as well as updating and expanding the client service center CALL CENTER in terms of increasing the number of employees and the number of lines while making the service available in Arabic and English, In this context, GOEIC possesses a large number of young competencies and cadres that can be used to upgrade the service system and expedite the implementation of procedures in line with the requirements of the digital transformation adopted by the State.

Regarding ABB's role in the establishment of the new electrical engine laboratory in the General Organization for Export and Import Control, Ahmed Hammad, Chairman of ABB Egypt Group, explained: "Egypt's National Climate Change Strategy 2050 is based on the existence of a number of opportunities during the current phase that should benefit Egypt, primarily the energy sector. ABB's involvement in gifting a specialized measurement laboratory to energy efficiency tests of engines was a step towards contributing to the achievement of part of this strategy as a global leader in the manufacturing of energy-saving engines that conform to the highest international standards."

Eng. Ahmed Samir, Minister of Commerce and Industry, conducted an inspection tour of food laboratories. He reviewed the working system of 118 laboratory covering all air, sea and land ports equipped with the latest inspection devices and operating in accordance with the latest global systems. The Minister also inspected industrial laboratories where he reviewed the system of quality testing laboratories for industrial and engineering goods, which numbered 136 laboratories spread across the country. Vehicle spare parts, equipment, chemicals, building materials, thermals, toys and children's toys according to Egyptian and international standards. The Minister also inspects batteries, toys and belts as well as shock absorber labs and air filters and reviews inspection and testing procedures in those labs.

Eng. Ahmed Samir inspected the electronic building in GOEIC and reviewed the work of the Electronic Control Center in the information network, which connects all branches of GOEIC in various ports. It also connects GOEIC with all the relevant government agencies, which contributes to facilitating the procedures without prejudice to the provisions of the regulatory procedures.

The Minister also visited the Trade Services Centre, which is responsible for providing direct services to exporters and importers, responding to inquiries and complaints and resolving obstacles. The Minister also reviewed the website of GOEIC, which contributes to effective communication with the foreign trade community, facilitating the export and import system and serving citizens, which developed and launched in 2018 to become the third version since the establishment of the GOEIC website in 2004. The General Organization for Export and Import Control is one of the first governmental entities to launch a distinct portal available in three languages “Arabic, English and French “to keep abreast of business developments. One of the most important features of future development is the launch of services provided by GOEIC online to become an electronic platform for all services of GOEIC to end all services to customers and collect fees through e-payment and e-portal.

At the end of his tour, Eng. Ahmed Samir inspects the management of the business sector in GOEIC , which is one of the important departments of the Trade Services Center, which is mandated to issue statistical reports, data and studies on the movement of exports, imports and reports on trade between Egypt and the world countries. It also carries out a monthly statistical statement to explain and clarify foreign trade data and provide services to various entities, including the Presidency of the Council of Ministers and Ministry of Commerce and Industry, Central Agency for Public Mobilization and Statistics, Chambers of Commerce, Embassies and commercial representation, universities and educational institutes to serve the foreign trade community and support decision makers.