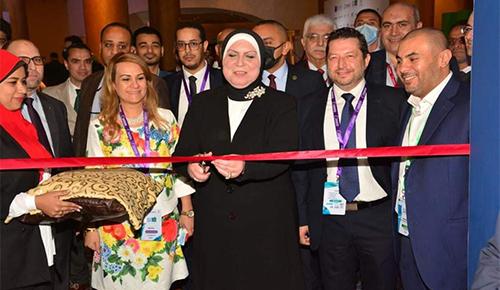 The minister of trade and industry inaugurates the third session of the international conference "Hats Egypt 2021" recognized by the engineering industrial export council headed by engineer/ Sherief Elsayad.

The inauguration was attended by a group of trade and industry and businessmen; with participation of 35 Egyptian companies and nearly 70 buyers from 26 countries from Africa, the Arab Gulf and eastern European countries, where this conference represents a great opportunity to promote home appliances in the foreign markets.

The minister confirmed that engineering industries sector is considered one of the most important productive sectors in the national economy which contributes in providing the local market needs and export to the foreign markets.

Engineer / Esam ElNagar the chairman of General Organization for Export and Import Control attended this inauguration. He referred to the importance of this meeting being one of the most important activities recognized annually by the engineering industrial export council to support the Egyptian exporters and to create real opportunities for their products to invade the international markets.

Also, he praised the conference that will recognize the field visits for the international buyers to the Egyptian factories and it has an effective role in identifying more closely the capabilities of Egyptian companies and to explore ways of joint cooperation.

As he confirmed the necessary to give the priority to develop the Egyptian exports and raise its competitive capabilities at all international markets to achieve the president's initiative (100 billion dollars export).

Also he mentions that the engineering goods sector achieved the fourth stage in the volume of Egyptian exports during the period from (January till September) 2021   to achieve an increase to be 682 million dollars (42%)that its exports reached to be 2.294 billion dollars various 1.612 billion dollars during the same period of the previous year.

The most important countries which this sector exports to: Britain – Northern Ireland-Slovakia- Saudi-Turkey and United Arab Emirates.