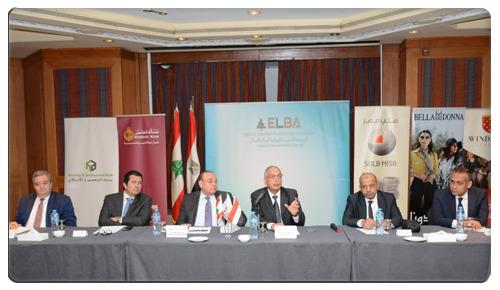 The Egyptian Lebanese Businessmen's Association organized an extensive meeting with Eng./ Essam Al-Naggar, Chairman of the General Organization for Export and Import Control, on Monday evening to discuss the decisions governing the import process, in the presence of:

- Eng./ Sayed Mansour/ Manager of the Central Department of Industrial Imports of GOEIC

- Mr. Omar Belbah / member of the Board Directors and Chairman of the Committee on Relations and Information of the Egyptian Lebanese Society.

- Mr.Fouad Hadraj / Deputy Chairman of the Board of Directors of the Egyptian Lebanese association.

To lighten the business community in Egypt, Lebanon, the press and the media.

In his opening statement to the meeting, Fouad Hadraj, Vice President of the Board of Directors of the Egyptian Lebanese Business Association, thanked and grateful His Excellency President Abdel Fattah el-Sisi for instructing the government to implement the recent resolutions he issued in support of the industry, which reassured investors and represented a rapid response to the national private sector and real support from the industry's political leadership at a critical global time both from the Russian-Ukraine crisis and the Corcrisis.

Hadj stressed the importance of meeting the Egyptian business community and Lebanese investor’s members of the association with Eng./ Essam Al-Naggar to highlight the importance of the role played by the General organization for Export and Import Control as well as the need to strengthen cooperation between GOEIC and the Association to the industrial and export community.

Requiring the establishment of a standing committee of the General Organization for Export and Import Control to help companies solve the occasional problems that arise during the application while continuing to develop, update and increase the certified factories in Egyptian ports, in order to facilitate the procedures and speed up the transaction time while finalizing the mechanization of the procedures.

Eng./Essam Al-Naggar, Chairman of the General Organization for Export and Import Control, said that His Excellency the Prime Minister instructed him to allocate 932 million pounds for the development of laboratories in various Egyptian ports by adhering to the implementation of the latest international regulations and rules in the inspection and testing procedures.

He pointed to the establishment of a strategic plan from 2018 to 2020 to develop its central factories in Egyptian land, sea and air ports at a cost of 360 million pounds.

His Excellency also stated that the General Organization for Export and Import Control is one of the arms of the Ministry of trade and Industry and plays an important pivotal role in examining Egyptian industrial and chemical imports in its operations at air, sea and land ports to ensure that they conform to Egyptian and international standards, as well as inspection of supplies and inputs received for the industry and working to speed their release in support of Egyptian industry.

This is reflected in the increase in the number of labs located in both the port of Dakhilah from (8) industrial laboratories to (28) industrial laboratories covering all areas of traditional inspection and a number of new areas that exist in Egypt and the Middle East for the first time. (4) Laboratories have been established specializing in areas including polymers, biodegradable plastic, detergent and soap inspection, timber inspection, building materials and textile quality tests. In addition, the number of laboratories in Damietta Port has been increased from (9) to (13). The port is being developed according to the requirements of the letters and items received by the Ministry.

GOEIC has also paid great attention to improving the efficiency of its Labs infrastructure and providing it with the latest, most accurate and fastest laboratory devices that support all tests required on imports and exports to conform to international standards, thereby supporting its competitiveness in the global market.

Referring to the global interest in the issue of climate change with the aim of reducing the impact of global warming and the trend towards the use of biodegradable products and the direction of many countries, especially the GCC countries and some African Union countries, which represent a fertile market for Egyptian exports to rely on suitable and high-quality alternatives and enable these countries to transition to a green economy.

By establishing technical controls and specifications for goods exported to it, allowing entry into its territory only for biodegradable goods and products, and limiting the import of products that are difficult to dispose of and cause a high percentage of gases emitted in the atmosphere, such as, but not limited to, biodegradable plastic products, biodegradable detergents and eco-labelled textile products.

GOEIC, in its role in serving exporters, supported and facilitated Egyptian exports in 2021, has established a Lab to inspect biodegradable plastic products in accordance with international standards. It has also obtained accreditation in the field of Saudi technical regulation of biodegradable plastic products, encouraging Egyptian exports to enter Saudi markets and supporting national industry and helping it to transition to a fruitful economy.

Eng./ Essam replied to a question about the complaint of some of the delayed inspections at the laboratories as a result of the lack of workers. He explained that 150 engineers and technicians were contracted to work in the laboratories to be opened, explaining that they were trained and qualified on the latest devices.

With regard to the examination of food contacts, it was agreed with Dr. Hussein Mansour, Chairman of the National Food Safety Organization, that the examination would take place at the laboratories of the General Organization for Export and Import Control.

Al Naggar stated that a carbon footprint measurement Lab will be established in all ports, and the port of Dakhila in Alexandria governorate will be started with an investment size of up to 15 million pounds to serve exporters and meet the requirements of the European market.

His Excellency stated that to complement the role adopted by the General Organization for Export and Import Control towards supporting and encouraging clean and biodegradable Egyptian exports, GOEIC included in its plan for 2022/2023 the establishment of a specialized laboratory to conduct biodegradation testing of exported products (detergents - textile products - paper products -...). By measuring carbon footprint and conforming to global legislation that will have a positive impact on the reputation of the national industry and therefore Egyptian exports as well as on the exporters' community by reducing the cost and time of inspection and testing. Exporters are currently sending a sample of goods to be exported for biodegradation testing at a factor in European countries, which represents a waste of time and the country's foreign currency resources.

This is an initial step for the participation of the General Organization for Export and Import Control as one of the authorities of the Ministry of Trade and Industry in reducing thermal emissions, reflecting Egypt's significant progress in the transformation of clean uses and access to the green economy, as part of the State's tireless efforts to meet its commitments towards participation in reducing the impact of climate change.

As Al-Naggar reported, GOEIC has not merely done so, but through its continuous contact with the exporters' community and export councils, it has been shown that many countries of the world do not merely produce laboratory test results but require that Egyptian exports enter their territories be accompanied by a matching evaluation certificate. The registration of the conformity certificates unit at the Saber Saudi platform in partnership with GOIEC in facilitating the Egyptian exporter and ensuring the reputation of Egyptian exports in the Arab Gulf States. The conformity certificates are issued at discounted prices for exporters.

On the other hand, Eng./ Essam Al-Naggar said that GOEIC had set up a unit to facilitate the work of exporters and confront the obstacles facing them.

Pursuant to GOEIC's tasks in supporting the national industry and encouraging Egyptian exports, GOIEC ensured constant communication with the industry community, exporters, export councils and industrial chambers to identify and study problems that may arise and work to solve them as soon as possible. "The Unit for Facilitating the Work of Exporters". One of its tasks is to communicate supportively with exporters and quickly resolve their problems in coordination with the relevant authorities. Both within GOEIC competence and through cooperation with the community of business organizations such as the Federation of Industries and the Foreign Trade Sector. In some cases, the problem is presented to the Minister of Trade and Industry Nevein Jamma for resolution. GOIEC also makes available foreign trade data to exporters to study global markets.

Eng./Essam added that the customer can communicate with GOEIC to facilitate the work of exporters by:

-The customer can communicate with GOEIC customer service by: