GOEIC holds a meeting with the Minister Counselor for Commercial Affairs of the U.S. Embassy in Cairo 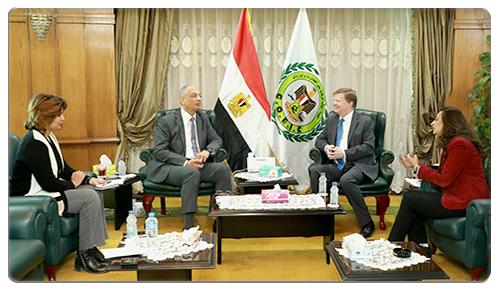 In the frame work of GOEIC's caution to remove all obstacles which hurdle the trade movement towards business society and to facilitate the foreign trade movement, Engineer/ Essam Elnaggar, chairman of GOEIC, meet today both:-

At the end of the meeting the two parts agree on the necessary of joint cooperation between them and Also Engineer/Esam Elnagar expressed his pleasure as per the delegation's visit and stressed that GOEIC is always ready to provide its full support to the business community.