With a view to increasing trade exchange between Egypt and Brazil, the Authority receives the delegation of the Arab-Brazilian Chamber of Commerce 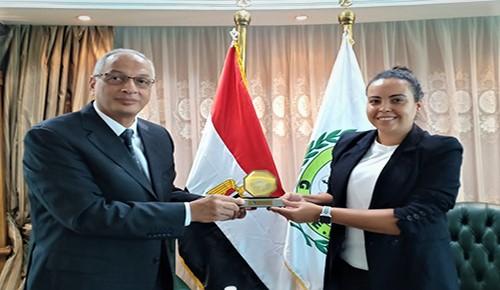 Today, the Chairman of the General Authority for Export and Import Control,   Eng. Essam Al-Najjar, received a delegation from the Arab-Brazilian Chamber of Commerce, represented by:

This came in order to activate the memorandum of understanding between the two parties signed with a view to increasing trade exchange and economic cooperation between Egypt, Brazil and the surrounding countries and removing all obstacles which hindering trade between the two countries, in the framework of the Ministry's concern  to create an atmosphere conducive to the common interests, supporting trade cooperation and facilitating the movement of goods and services, especially in the The agreement on free trade of Mercosur and the signing between Egypt, Brazil, Argentina, Uruguay and Paraguay has been in force since 2017.

It may be noted that the most famous imports from Brazil are maize - iron ore - cane sugar - soya beans - meat from Duke - pepper - drugs - coffee - tobacco - refrigerators - printing paper.

At the end of the meeting, Chairman of the General organization for export and import control Eng. Essam Al Najjar expressed his thanks to the Brazilian delegation and said that GOEIC is ready to offer full support to facilitate trade between Egypt and Brazil.