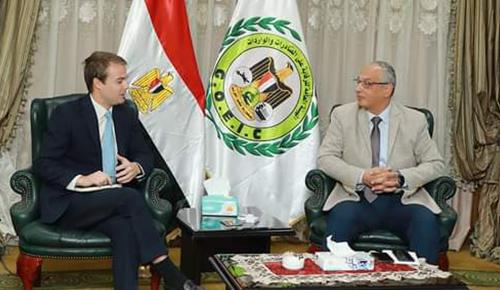 In the frame work of GOEIC's caution to remove all obstacles which hurdle the trade movement towards the business community and to facilitate the foreign trade movement, the chairman of GOEIC, engineer/Essam El-nagar, received Mr. Edward, the British commercial attaché and his accompanied delegation represented by Dr. Shereen Elsabghaa, the commercial policies counselor and Mr. Sameh Ahmed the territorial market counselor.

The facilitations presented by GOEIC to the exporting business community in the united kingdom was the main prime of discussions where the chairman of Goeic answered all the delegation enquiries concerning the quality certificates required on renewal the status of the enlisted companies in both of the ministerial decrees numbered 43 /2016 and the decree of visual inspection according to article 94 of the executive regulation of import and export numbered 770/2005.

He, the chairman of GOEIC, pointed out the necessity of periodical review from the enlisted companies to their status through the web site of GOEIC that shows clearly in three languages Arabic, English and French the status of these enlisted companies and to what extent they satisfy the requirements of the ministerial decree numbered 43 /2016.

At the end of the meeting, the chairman of GOEIC expressed his pleasure to the delegation and asserted that GOEIC is always ready to provide its full support to the business community.