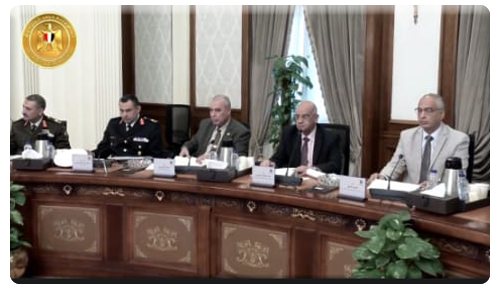 Dr. Mostafa Madbouly, Prime Minister, chaired today the meeting of the Supreme Council of Ports, in the presence of Lieutenant General/ Kamel Al-Wazir, Minister of Transport, Mr. Walid Gamal El-Din, Chairman of the General Authority for the Development of the Suez Canal Economic Zone, Mr. Hossam Haiba, CEO of the General Authority for Investment and Free Zones, and Major General Mr. Madbouly Qaoud, Director of the Transport Department of the Armed Forces, Eng. Essam Al-Naggar, the Chairman of the General Organization of Export and Import Control, Major General Amin Al-Jaali, Assistant Minister of Interior for the Ports Sector, Mr. Al-Shahat Al-Ghatouri, Head of the Customs Authority, and Dr. Khaled Sharif, Assistant Minister of Tourism and Antiquities for Digital transformation, and Dr. Hazem Hussein, the General Director of the General Department of Quarantine at the Ministry of Health and Population ,and the officials of the Ministry of Transport and the concerned authorities. also, Lieutenant General. Osama Rabie, Chairman of the Suez Canal Zone, participated in the meeting via video conference.

At the outset of the meeting, the Prime Minister renewed the reference to the important role of the Supreme Council of Ports, within the framework of the recent decision to reconstitute it, and the competencies that includes it, in which the council undertakes, including developing and reviewing the general strategy for all the ports of the Republic, and adopting a unified strategy for all Egyptian ports, in order to achieve Integration and co-ordination between them, in an effort to attract more containers and shipping lines from abroad, in addition to reviewing plans to secure the safety of maritime navigation and fixed and movable facilities in those ports, and proposing measures that would improve the investment climate, especially in the economic zone of the Suez Canal, while examining proposals for establishing Free zones and logistical zones that are easily linked to sea and land border ports.

During the meeting, the Minister of Transport gave an integrated presentation on the work activity of the Supreme Council of Ports during the last period, addressing the proposed tasks and specializations for the maritime transport sector, and the opinions and comments of a number of authorities on those proposed specializations, stressing that it would not result in amending the organization and tasks of the maritime transport sector and supporting its responsibilities Any overlaps with the current entities, as the new proposal means developing a unified national strategy for the maritime transport system, so that the sector undertakes the task of organizing, monitoring and supervising port authorities, the Egyptian Authority for the Maritime Safety , and companies operating in the same field with a cover to belong the Ministry of Transport while preserving the entities represented in Bodies and companies operating in the field of maritime transport and legal centers achieved, in accordance with the general policy of the state, leading to integration and coordination between ports and the port community within a joint work system.

During the meeting, the Minister of Transport also reviewed the results of the work of the technical committee formed to conduct an integrated study with the aim of developing a future strategic vision for the development of various aspects of the maritime transport industry, in a way that contributes to upgrading the level of services provided through this important sector, and to maximize our capabilities and capabilities in this field.

Lieutenant General Kamel Al-Wazir noted the proposals and efforts for developing and supporting the Egyptian merchant marine fleet, within the framework of achieving the goals of the Egyptian maritime transport strategy, and developing and increasing the competitiveness of seaports.

The Minister of Transport reviewed a set of proposed incentives and facilitations that would achieve the required sustainability for shipping lines and ship owners in planning their trips to and from Egyptian ports, and encourage navigational alliances, especially transit container ships, to use Egyptian ports, in addition to encouraging investment in ports and the Suez Canal economic zone.