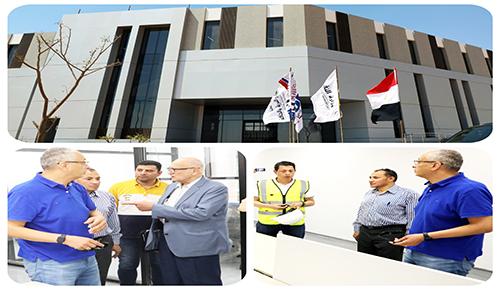 Eng./ Essam Al-Naggar, The Chairman of the General Organization for Export and Import Control, visited the dry port on the 6 of October and the dry port is the first integrated dry port on the 6 of October on an area of 100 acres with the aim of achieving a major economic transition. It is also Egypt's first inland dry port. The total cost of the project is about 60 million Dollars.

This visit comes in preparation for the opening of the port in accordance with the directives of the Lieutenant General- Kamel Al-Wazir, who was agreed upon in the Ministry's meetings within its headquarters in the New Administrative Capital. All the supervisory authorities participated in the visit, where the project contributes to increasing the transport of goods by rail. and aims to ease the movement of cargo on the roads to maintain the road network and reduce the operating cost, It will be designed according to the latest global standards, and there is a blueprint for linking this port to seaports via the rail network, It will contribute to increasing the capacity of seaports and reducing vessel waiting time and freight release time, and will help to create employment opportunities for youth.

It is worth mentioning that the dry port of 6 October won award "IJ Global”, as the best transport deal for the Middle East and North Africa region, as described as one of the first environmentally friendly projects associated with the sustainable transport system and green cities that are one of the solutions to cope with the effects of climate change.

The 6 October dry port project is one of the projects funded by the European Bank for Reconstruction and Development under the "Green Cities" programmer, which aims to transform 100 cities into green cities by 2024. The dry port of 6 October has customs departments and all regulatory authorities to end import and export procedures, warehouses and cargo shipments.