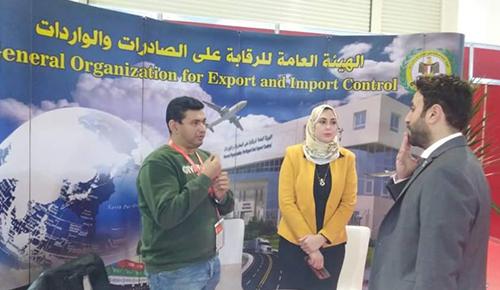 Her Excellency the minister of trade and industry, Neveen Gamea on behalf of his Excellency the prime minister inaugurated the activities of the sixth session for Food Africa fair held at Egypt's international fair during the period from 12 to 14 December with participation of 400 local and international companies.

"Food Africa fair in its sixth session reflects the current trends of the Egyptian state towards developing and upgrading its commercial and economic relations with all countries of the African continent and it reflects the ministry plan aiming to increase exports and promoting remarkable Egyptian products to gain the trust of the local and international markets." Said, Nevean Gamea.

The General Organization for Export and import control participated in the activities of Food Africa Fair to achieve more communication between the ministry bodies and the business community through communicating with the fair visitors from both importers and exporters to eliminate any hurdles that might face them and make them aware of the services presented by GOEIC to facilitate the trade movement and increase the rate of exports to international markets.

Engineer/Esam Elnagar (chairman of GOEIC) indicates to the importance of Food Africa Fair to achieve the food integration among the countries of Africa, it represents an important platform for enhancing cooperation between African continent countries to achieve the food security ,surly to the importance of benefiting from the free and preferential trade agreements signed between Egypt and a large number of countries and the global economic blocs on the increase of food industrial sector exports of different global markets.

His Excellency has stated that the agricultural crops sector achieves the fifth place in the value of Egyptian export during the period from (January till September)2021 to achieve an increase to be 154 million dollars (8%),that its exports reached to be 1,976 billion dollars versus 1,822 billion dollars during the same period of the previous year.