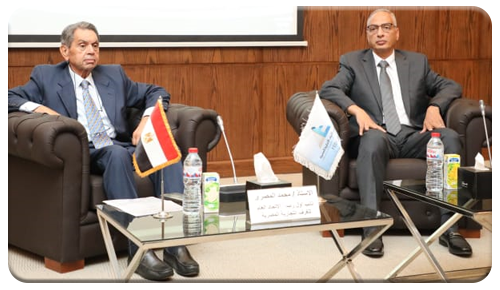 The General Federation of Chambers of Commerce under the chairmanship of Eng. Ibrahim Al-Arabi organized a meeting with the Chairman of the General Organization for Exports and Imports Eng. Essam Al-Naggar to explain the mechanisms of the exporter system adopted under the Euro-Mediterranean Partnership Agreement on the basis of the recommendations of the National Committee on Rules of Origin to be introduced on 15 September.

The General Eng. Essam Al-Naggar, head of the General Organization for Export and Import Control, confirmed that an electronic platform will be launched on GOEIC website at the beginning of next October for the approved exporter system (Approved Exporter) to allow the exporter to register electronically, provided that the data and documents are reviewed electronically and the applicant is informed of acceptance or rejection to complete the procedures and If the application is accepted electronically, a period not exceeding one week will be set from the date of admission to see the original documents of the General Organization for Export and Import Control. If the exporter updates the data and submits all supporting documents, the exporter's registration number of at least four digits (0000) shall be given and then moved to the certified source status stage.

The chairman of GOEIC stated during the meeting that 107 export companies that have applied for registration in the system will be registered and met all the requirements once registration is available.

Eng. Essam Al. Naggar also added that the approved exporter system gives its advantage to exporters with certain requirements that they replace the issuance of the certificate of origin with its commercial invoice or any other commercial document with the codification of an agreed phrase proving the origin of the preferential goods and the granting of a number to that exporter with special agreed codes so that each certified exporter has its own number. The written commercial document treats the phrase and the approved exporter number as a document of origin.

The Approved Exporter also represents a significant opportunity for exporters to access foreign markets by providing the "invoice statement" alternative as one of the most important documents required for export under trade agreements, namely the certificate of origin.

The Exporter replaces the certificate with the inclusion of the "invoice statement" undertaking on the commercial invoice or any of the commercial documents accompanying the shipment undertaking to meet the rules of origin and the goods attached are of preferential origin and are currently one of the global trends in what is known as: "Self-issue Proof of Origin". The Exporter registration stage is one of the important and essential stages required for the registration of an approved source as well as the most important stages required for the issuance of electronic certificates of origin in accordance with international conventions.

Eng. Essam Al-Naggar was keen to know the complaints of exporters and the obstacles to exports and promised his sovereignty to study them with the competent authorities in support of them and in implementation of the state directives to bring Egyptian exports to 100 billion dollars.