Mr. Essam Al-Naggar the Chairman of GOEIC receives the Minister of Trade and Tourism of Djibouti 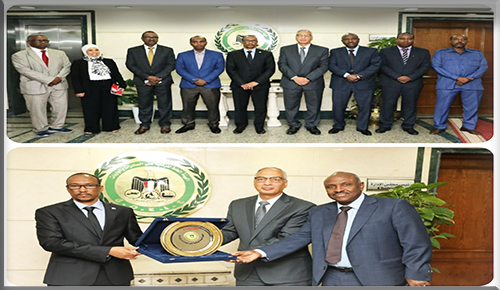 Mr. Essam Al-Naggar, Chairman of the General Organization for Export and Import Control, receives Mr. Mohamed Wursama Deré, the Minister of Trade and Tourism of Djibouti and his accompanying delegation significant support from the political leadership to strengthen economic, trade and investment relations with the State of Djibouti. The meeting discussed ways to growth and develop joint economic and trade relations between Egypt and Djibouti and reviewed current global economic developments in the light of the coronavirus pandemic and the Russian-Ukrainian crisis.

Eng. Essam Al-Naggar also noted that the visit of the Minister of Trade and Tourism of Djibouti to Cairo led a delegation of a number of business leaders in the State of Djibouti represents an important step towards strengthening trade relations between the two countries and a distinct opportunity to increase Egyptian exports to Djibouti to inform the delegation of the development of the General Organization for Export and Import Control at the level of individuals and chemical, food and industrial laboratories, he stressed the Egyptian State's desire to strengthen economic relations with the State of Djibouti with the aim of achieving a qualitative leap in the level of joint relations in various fields and at all levels, especially since Djibouti is an important partner for Egypt in achieving economic development and regional security in the Red Sea and the Horn of Africa.

The volume of trade between the two countries has also grown significantly over the past year, reaching $95 million, compared with $82.1 million during 2020, an increase of 15.7%. Egyptian exports to Djibouti reached $88.3 million and Egyptian imports reached $6.7 million.

For his part, Mr. Mohamed Wursama Deré, Minister of Trade and Tourism of the State of Djibouti, stressed his country's desire to expand the frameworks for joint economic cooperation with our sister Egypt, particularly in the light of the Russian-Ukrainian crisis and the coronavirus pandemic and its negative consequences for the global economy. He pointed out the importance of working to achieve economic integration between the two countries and benefit from the experiences in all industrial and agricultural fields based on the strong historical relations between the two countries within the framework of Arabism, the Islamic Conference, the African Union and the COMESA. The State of Djibouti represents a strategic depth of the Egyptian state in the Red Sea region, noting the importance of strengthening joint cooperation between the two countries to build a unified vision to meet major global challenges and work towards achieving food security and increasing the terms of trade between Djibouti and Egypt.

He noted that the current momentum of the two countries in exchanging official visits at the presidential, ministerial and business levels is paving the way for the start of a new phase of outstanding economic relations between the two countries during the next phase, pointing to the possibility of benefiting from the Djibouti market as a hub for the enforcement of Egyptian exports to the markets of many countries in the East African region and the Horn of Africa.

At the end of the visit, Mr. Essam Al-Naggar gave the GOEIC shield to Mr. Mohamed Wursama Deré, Minister of Tourism and Trade of Djibouti, as an expression of his pleasure in meeting him.