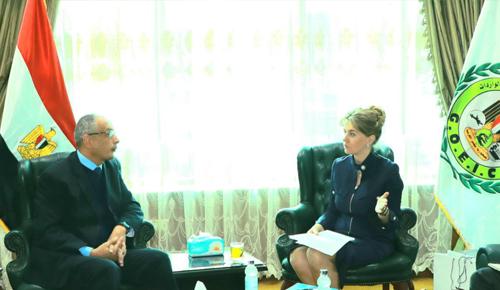 In the frame work of GOEIC's caution to remove all obstacles which hurdle the trade movement towards the business community and to facilitate the foreign trade movement, the chairman of GOEIC, engineer/ Esam Elnagar, received the Ukraine delegation represented by Mrs. / faledy selvia megltska and Mr. / Igor didenko the commercial attaché at the Ukraine embassy and his delegation.

The delegation asked engineer /Essam Elnagar, the chairman of GOEIC,   a number of questions concerning the pre-shipment inspection certificate issued according to the ministerial decree numbered 991/2015 and the role of GOEIC to accept these certificates of imported shipments especially, those accompanying food products imported from Ukraine..

The delegation also asks about the status of the Ukraine companies from registration according to the decree numbered 43/2016. He explained that most of the Ukraine companies that submitted for registration according to the above mentioned decree have been registered according to the assigned ad hoc register at GOEIC. He added that the Ukrainian registered companies should keep following what is published on GOEIC'S website where a list of companies that might be warned, suspended or written off is published on the website due to the fact that they did not submit the renewal of the validity of its document to GOEIC.

In addition, the delegation wondered how to view the new instructions and legislation related to GOEIC's function .He answered that all these instructions are publish on the website of GOEIC with the three languages Arabic, English and French.

At the end of the meeting, the chairman of GOEIC expressed his pleasure as per the delegation's visit and asserted that GOEIC is always ready to provide its full support to the business community.